WHAT IS IT AND WHY IS IT GOOD?

While this may look like a child’s toy, and it is, it is also a fun little gadget to mess with while on a creative break. This is the Flynova Hover Ball which is something I wish I had when I was a kid but, even better, I have it as an adult! It’s a small drone propellor protected by a plastic cage that you can toss to others or have it come right back to you! It does not fly around like a normal drone instead the propeller is designed to keep the ball at a fairly constant height so that you can do a light toss and have it fly across the room for someone else to catch. Once you get the hang of it you can experiment with tiling the ball to create creative paths to get it to others. It will not try to autocorrect and instead stays in place to keep its travel arc constant. If you were to tilt the ball slightly backward and throw it forward it will make its way back to you like a boomerang. It’s one of those products you are amazed works like advertised. Just be sure to get the right one because there are a lot of similar-looking ones and knock-offs out there. I have the right version linked at the bottom.

There are a few drawbacks, one being the battery life is pretty short, it feels like around 15 minutes on one charge, but does charge up quickly. Then there is the concern of the plastic cage being a bit too flimsy, I get that they need to keep it light so the motor doesn’t have to work as hard but if you catch it and squeeze too hard you may crack one of the braces. Having said that the cage does have some natural flex to it which does help both when catching it and when it crashes into the wall, and it will. Then the third is that after a few months it may collect hair and debris in the motor which can reduce the output of the fan, but it can be cleaned! 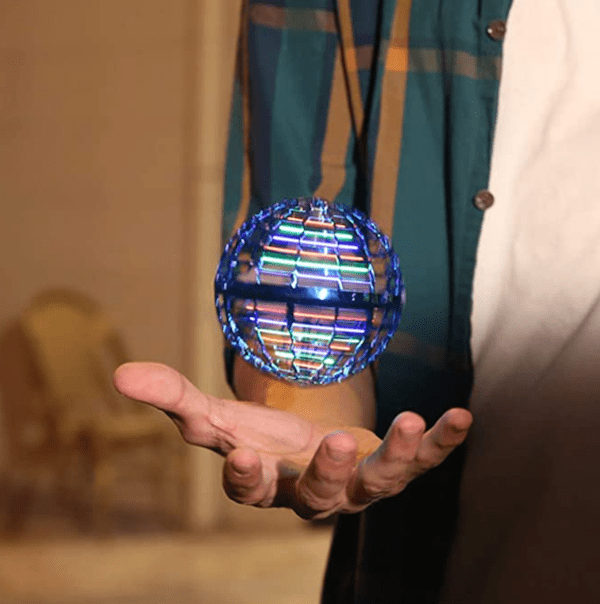 Even with those few drawbacks, the Hover Ball is worth the purchase. It’s an incredibly fun and unique little toy that I would love to see future advancements on or maybe a pro version. I could see a future sport being born out of something like this if it became sturdy enough. For now, it’s fun enough to just toss around and amaze your friends and family with!

Compatible with anyone who wants to have some fun!

If you have suggestions for similar products leave them in the comments!