Topoformer (aka Topology Deformer) is a groundbreaking deformer object plugin that alters the topology of your object based on a number of predefined algorithms in the plugin while still keeping your original geometry shape in tact. The plugin features plenty of options to tweak the way each topo type behaves all while in a procedural state. 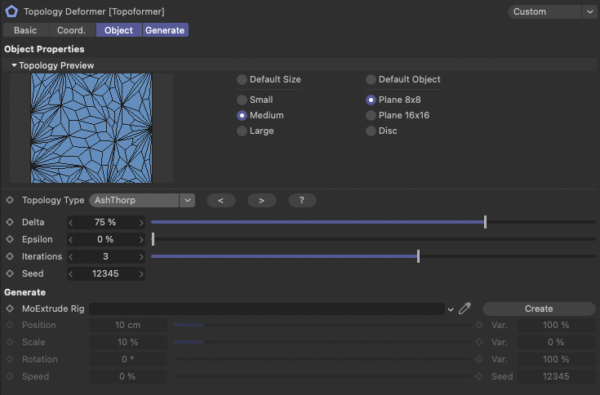 There are numerous topology algorithms built in that are based on popular looks from well know artists. Each look gives you very different results that you can then tweak within the plugin.

Drag and drop your MoExtrude deformer into the input field to create extrusions. You can also use effectors and fields within the MoExtrude to gain more control over how the extrusions are handled.

Utilizing the Colorizer and Mograph Color Shader you can individually color the extruded fragments of your topology with gradients.

Use the pen tool to draw where you want your topology to be effected to giving you full artistic control on how the final model looks.